This tutorial show to you the steps necessary to confront matchs and compute data in modalities CCFC : Casual Combinated Forces Contingents , UVE : Unit Versus Environment and UVU : Unit Versus Unit . In the MWMEL graphic archive of each unit always is marked in different colors the situation of each mech used after each match or confrontation or intervention finalized as show the following table :

UVE : Unit Versus Environment -> the unit envolved can assign until 4 mechwarriors to confront each drop on the battlefield against a OVF : Opponent Virtual Force but before go to the battlefield to complete the DropForce in the Game Lobby are activated the amount neccessary of FBM : Friend BotMechs that are the friend mechs controlated by the A.I. of the MW4M but the aforesaid FBM they are previously chosen before the match by the aforesaid unit envolved. 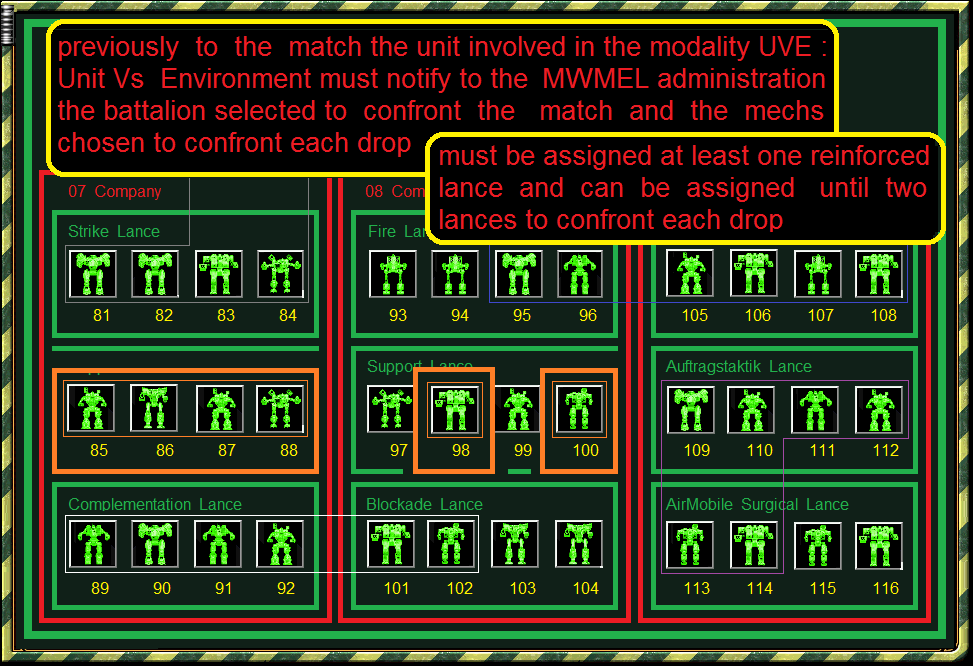 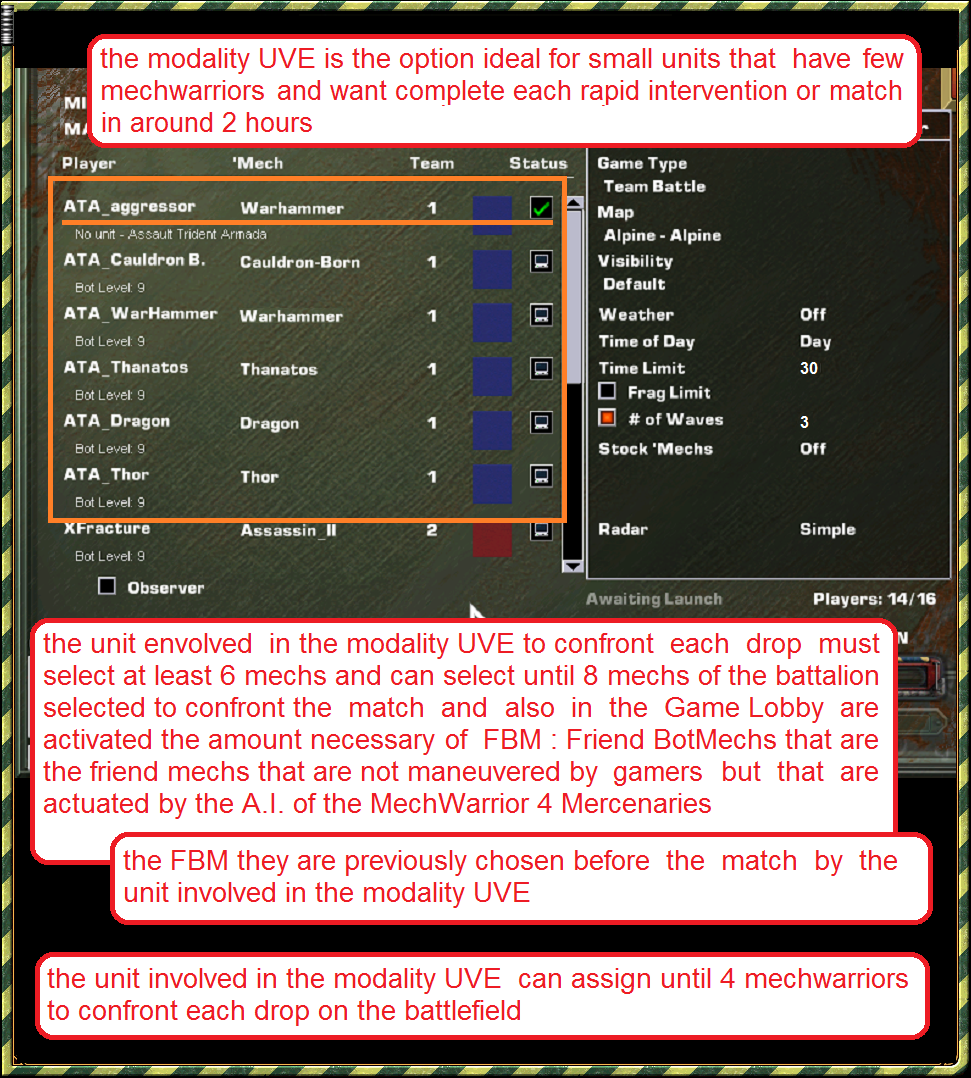 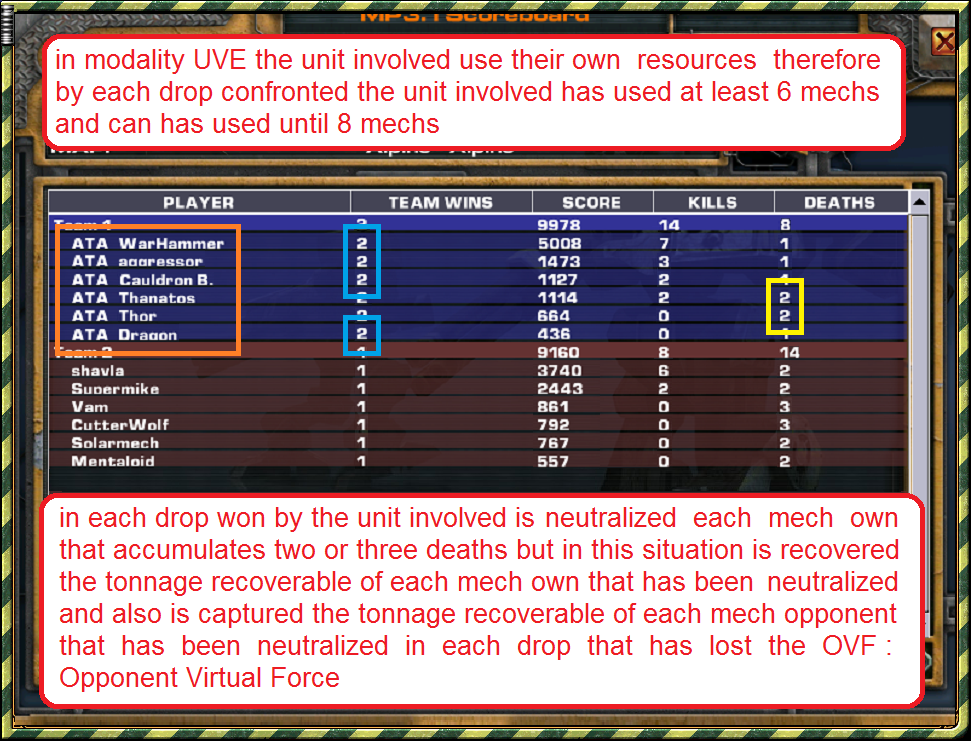 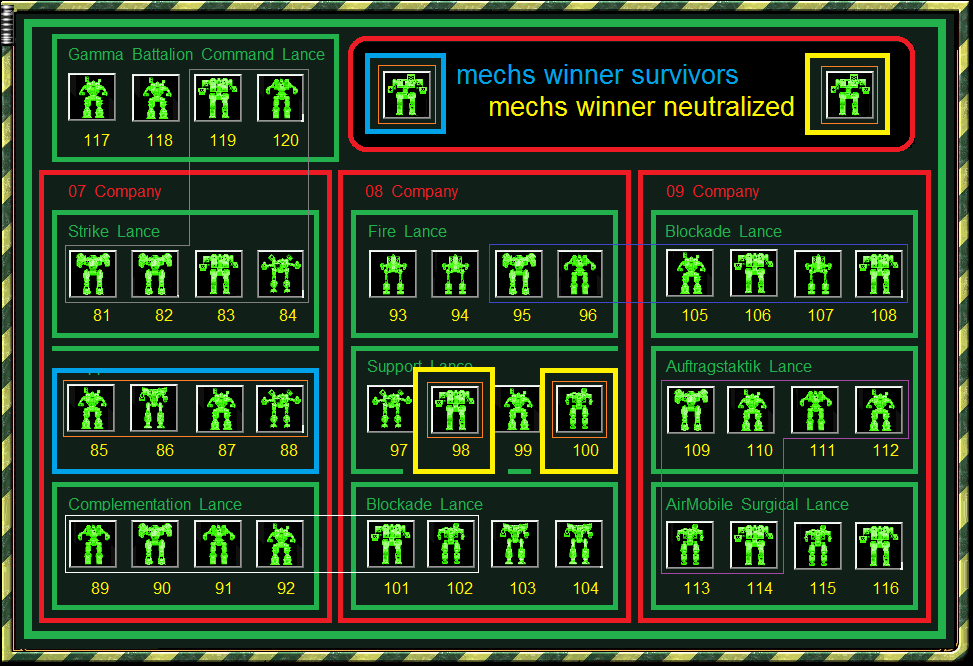 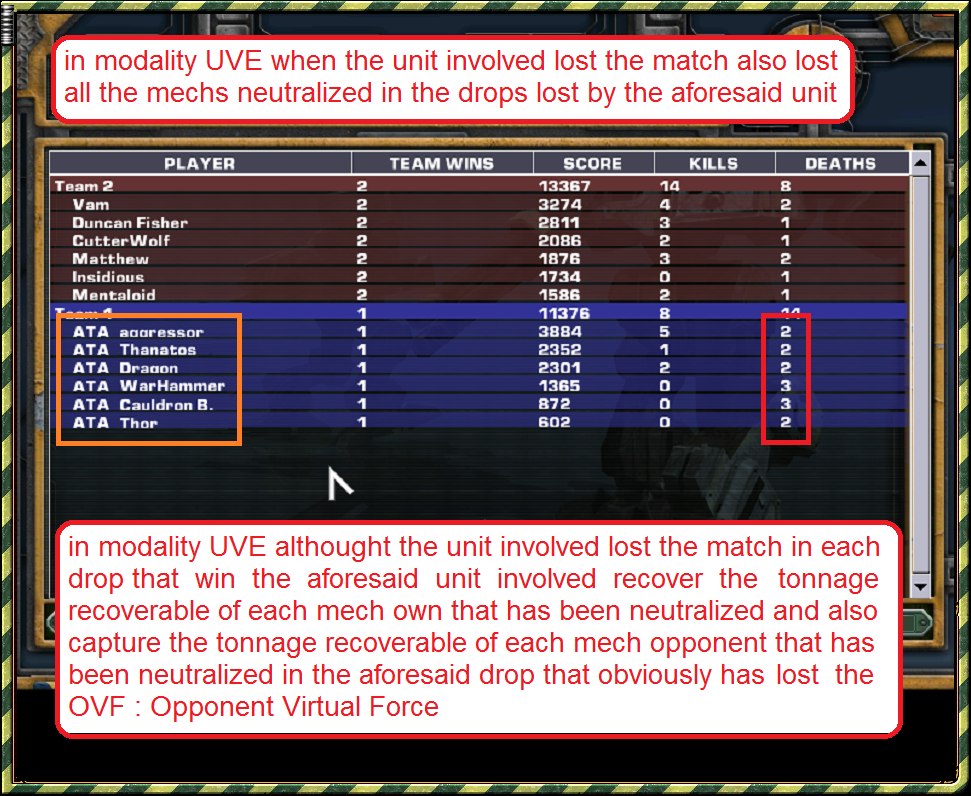 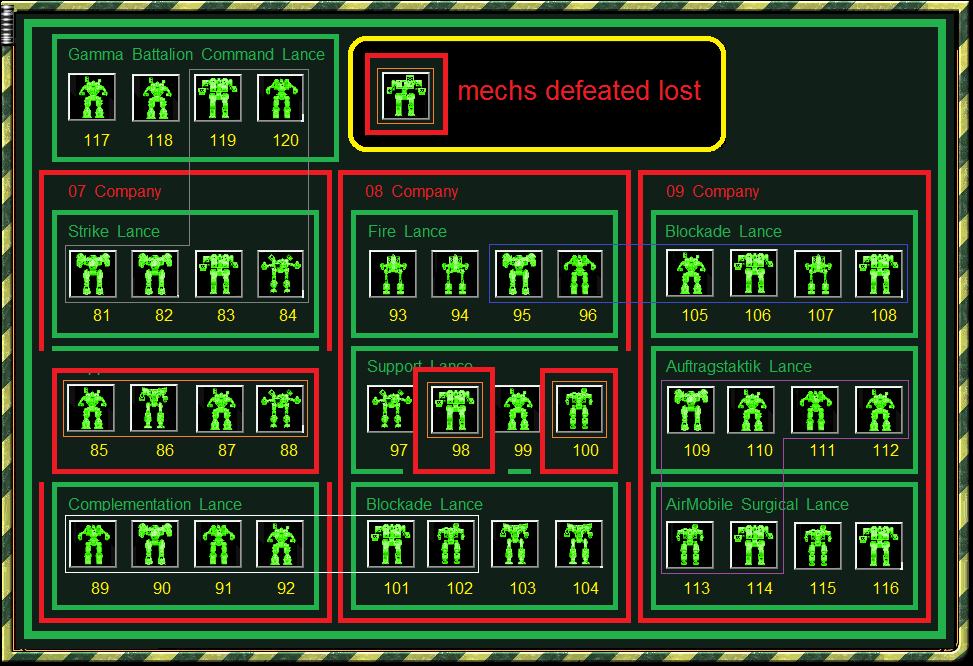 CCFC : Casual Combinated Forces Contingents -> each CCFC must to be a batallion assigned as CCFC and of every three batallions that have a unit can be assigned until a battalion as CCFC that can be used in the MWMEL servers of casual activity to No-Respawn and marked as CCFC and in which each mechwarrior can confront a campaign mission using mechs of a CCFC of its unit.The regimental command lance or company can be assigned to the CCFC too.
Can be assigned until 10 equal mechs for each CCFC.When a mechwarrior is connected to a server marked as CCFC and uses mechs that coincide with those of the CCFC of your unit is using resources from the aforesaid CCFC.For each mechwarrior in each match is used a mech by wave.A campaign intervention is terminated when at least 30 mechs of a CCFC are used and from that moment the CCFC can be repaired.Each CCFC achieve the victory in each intervention when neutralize at least 20 opponents mechs. 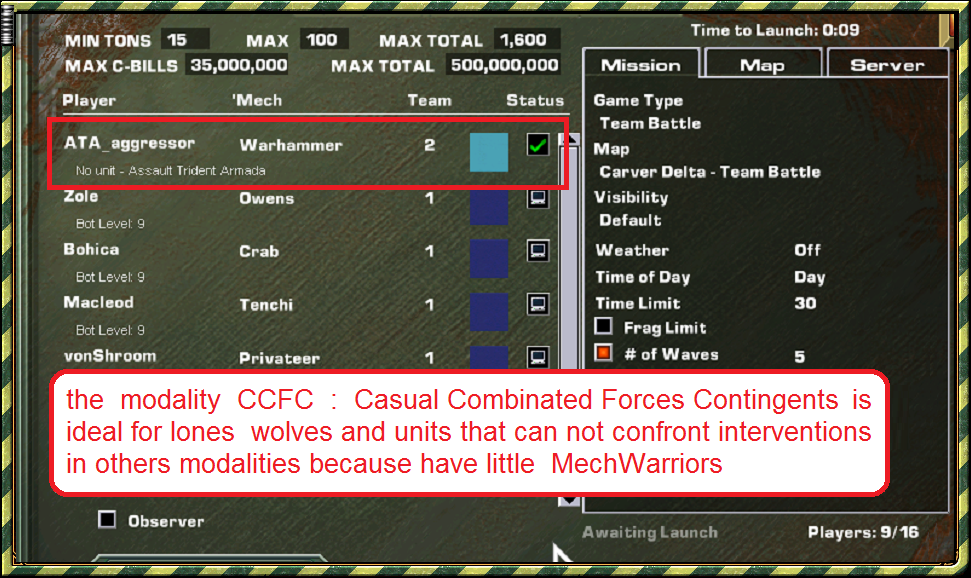 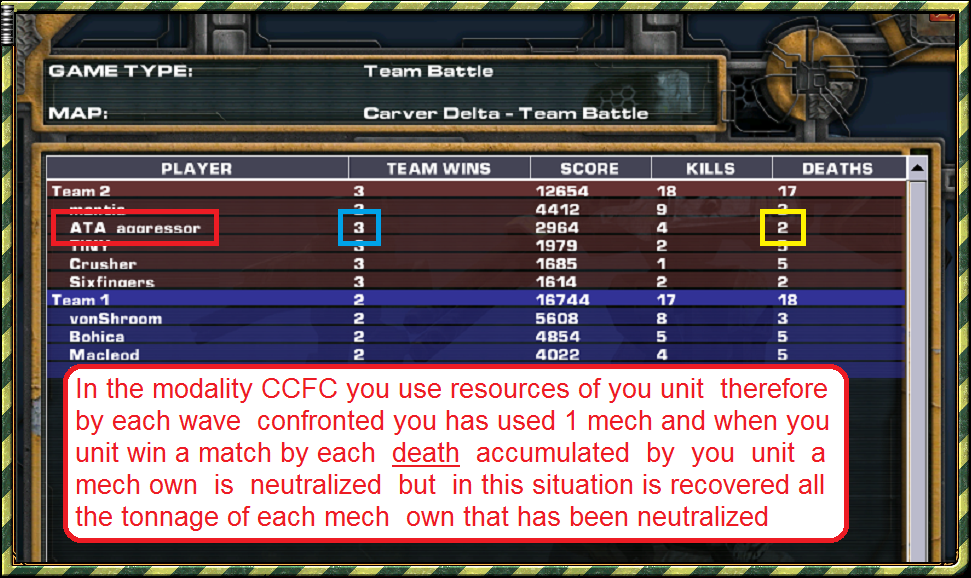 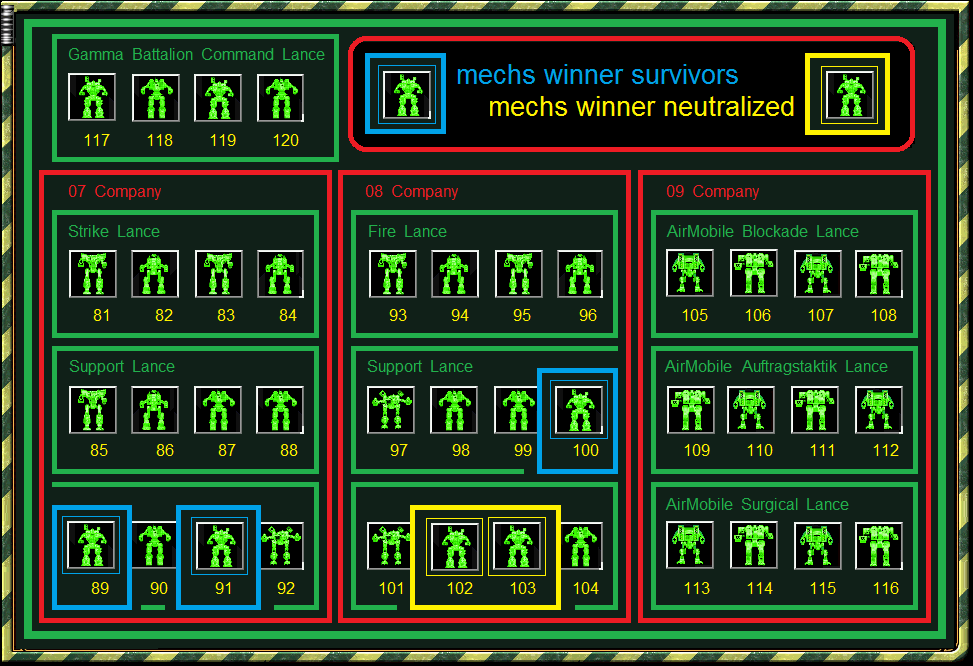 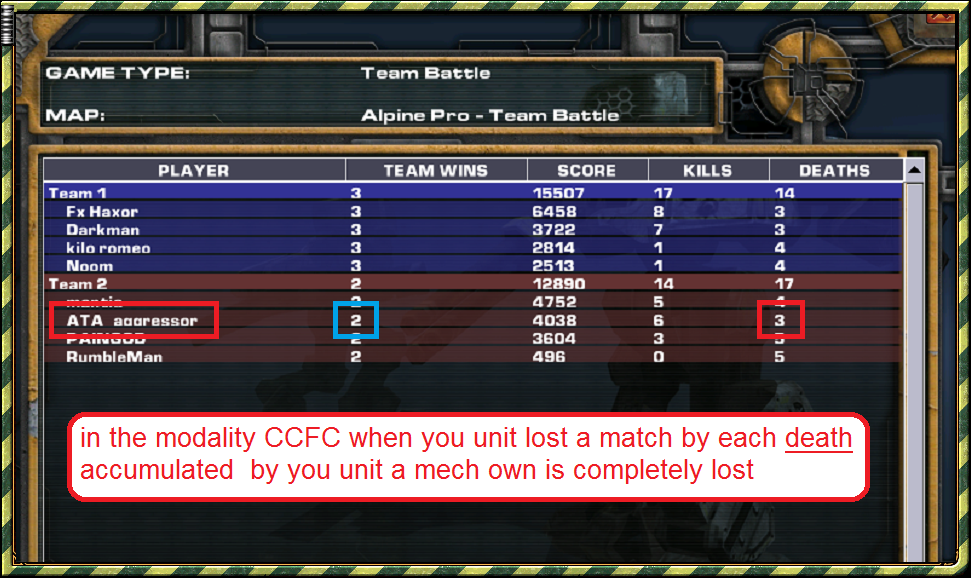 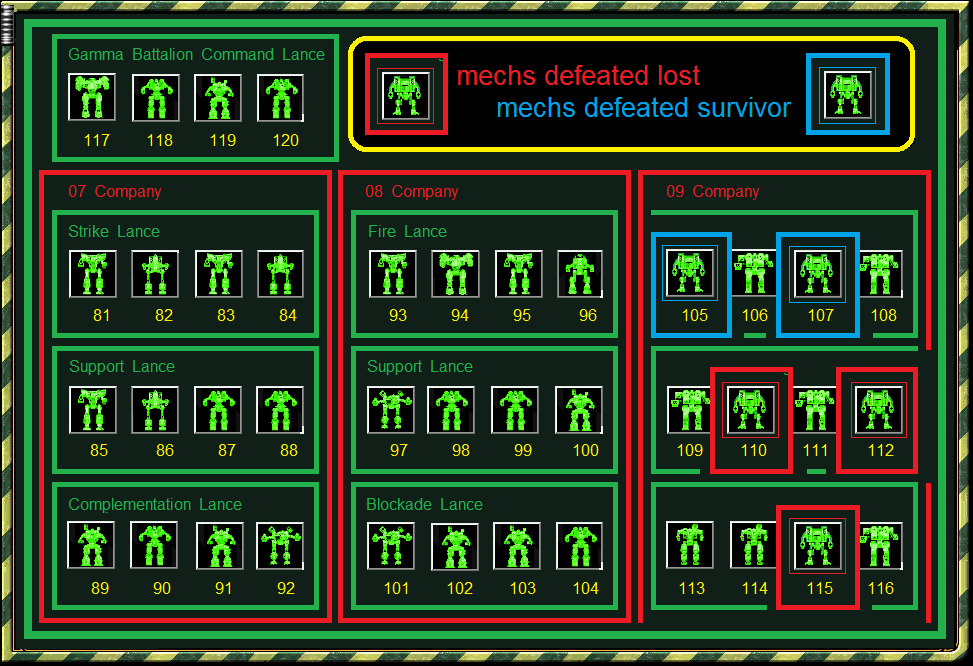 IMPORTANT !!! Before start each match in the modalities UVE and UVU is necessary notify the match to the MWMEL administration applying a match protocol very easy to use.

THE SCHEDULED MATCHS MUST BE CONFRONTED AT 5 DROPS AND IN CERTAIN CIRCUMSTANCES OPTIONALLY IS POSIBLE CONFRONT THE MATCH AT 7 DROPS . THE UNIT THAT WINS MORE DROPS THAN THE OPPONENT ACHIEVE THE VICTORY IN THE MATCH .

EACH DROP CAN TO BE CONFRONTED UNTIL 3 WAVES AND THE UNIT THAT WINS MORE WAVES THAN THE OPPONENT ACHIEVE THE VICTORY IN THE DROP.

NOTE I : To confront each match must be assigned a battalion but if the format Mission Play is selected can be assigned a combat force integrated by companies of different battalions and a optional command lance that integrate a force equivalent to a batallion.If are assigned 40 mechs for use in the battlefield additionally also can be assigned other additional lance or company.